This year, Heroes’ Square transforms into the beacon of horse racing for the 12th time. The imposing National Gallop pays tribute to Hungary’s past equestrian life; between 19-20 October, horse riders of the Carpathian Basin will be in the lime-light, competing to bring honour to their town. Imbued with history, the aim of the competition is to bring together Hungarian people living in and out the borders, and evoke equestrianism as part of Hungarian culture. It is an event that will live on in our memories: witness the masters of show jumping, horseback archery and carriage pushing!

During the event that strengthens Hungarian national spirit, Heroes’ Square becomes a horse racing track, with a “sand castle” built around the Millennium Monument ensuring the safety of horses and their riders. To create ideal circumstances for the horses in the concrete urban environment, multiple layers of special sand granules are used this way preventing injuries and slipping. The audience is seated around the racetrack, but those who would like to take a closer look can follow the race from the middle of the square.

The history of Hungarians is closely linked with our horse riding culture. Our ancestors were known all around the world for being an equestrian nation: they arrived at the Carpathian Basin on horseback as roaming herdsmen, and horse-riding was part of their lives for centuries. Horses played a decisive role in the battles of the time, and were used for agricultural duties and functioned as a primary means of transportation. To this day, equestrian traditions continue to be prestigious in Hungary.

The western model of Hungarian horse racing was adopted by an iconic figure of Hungarian history, István Széchenyi. The idea was planted in his mind when, as a hussar officer, Széchenyi visited England. With his assistance and the blessing of the emperor, the very first race was organized on 6 June, 1827 in Üllői út, Pest. Approximately 25,000 people watched excitedly as horses trained by English professionals raced against each other. Horse racing was a huge success from the start, and as a result, the number of breeders increased and numerous towns decided to organize races in the countryside.

The past of hussars was defined by the centuries old Hungarian equestrian culture. The so called light cavalry was first mentioned in written sources in the 15th century, but their heyday was in the 16th and 17th centuries. The hussar uniform and armour became known in several European countries by the 1700s; it was characterized by good quality tanned leather. The world-famous short-coat of the hussars flourished in the 18th and 19th centuries. A fur-trimmed coat with braided cords (“mente”) was part of the hussars’ military uniform that they wore over their tight inner jacket called dolman, or over their shoulders. They took this piece of clothing everywhere; in winter, it kept them warm, while in times of war it shielded them from the slashes of the enemy’s sword. The hussars’ footwear was an ankle-strap shoe with a steel heel buckled on it, while on their head they wore a helmet equipped with a nose protector, or a calpac made of lamb leather. Their light armour consisted of a sabre and a lance, and later they also used muskets. 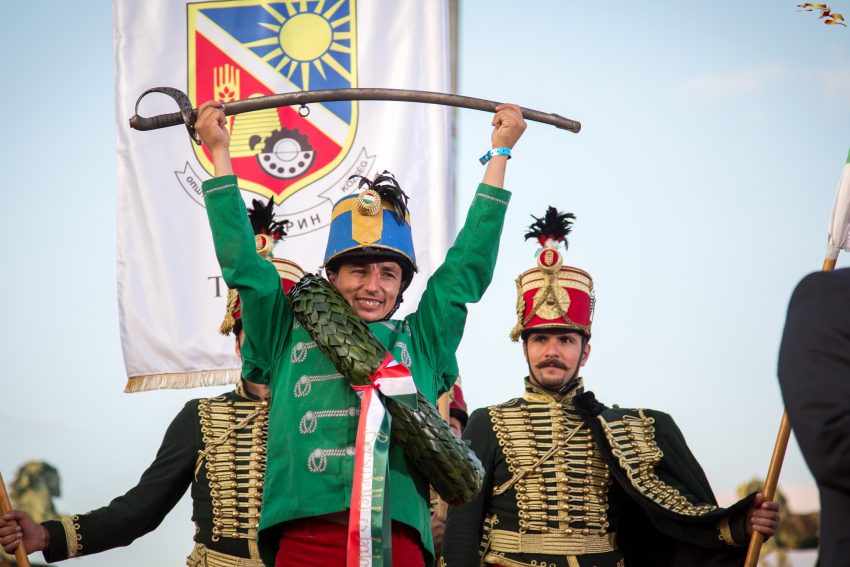 A horse-herder’s main tasks included grazing and guiding the herd. The most characteristic part of their attire was their handmade bullwhip that they used not only for steering the stud but also as a weapon. When used properly, the imposing tool makes a distinctive snapping sound. Horse-herders’ unique clothing consisted of a navy blue shirt and pants, but it was easy to recognize them by their wide-brim shepherd hat and black boots too.

During the National Gallop, Budapest’s popular avenue will be filled with life – even more than usually –, thanks to the Kitchen of Hungary gastro fair, where guests can choose among mouth-watering traditional Hungarian meals. Beside experiencing the authentic Hungarian hospitality, people are welcome to taste gourmet dishes, quality wine and pálinka. The Kitchen of Hungary will showcase meat dishes typical of Hungary too. The multifaceted Hungarian cuisine’s flavours will be presented to gastro adventurers in different regional sections. Cooking competitions and colourful programmes will also take place.

It has become a tradition that every year the event chooses a significant historical figure to honour. This year the National Gallop pays homage to the late army colonel, Lajos Kazinczy. The nobleman was studying in Tulln’s cadet school, and in 1848 he enlisted in the army. Kazinczy took part in the battle of Pákozd, fighting till the very end. He was barely 29 when they executed him in Arad. We keep him in our memories as the 15th martyr. Gyula Kedves, National Gallop’s historical advisor helped us recall his story.

Lajos Kazinczy showed signs of patriotism at a very young age as the youngest child in his family. He studied in Tulln, where he engaged in military studies together with Artúr Görgei. After completing his studies, he applied for the 9th Miklós hussar regiment where he tried himself as a commander. In the spring of 1848, the time of the revolutionary movement in Hungary, he enlisted in the army where his military experience, which was a rare capability those days, gave him the chance to deploy his professional skills.

The young soldier played an inevitable role in organizing and leading the army. His technical knowledge helped him successfully lead the organization of the sapper unit in Pozsony and Győr in November and December 1848. His peers discovered his exceptional talent early, and as a result, Kazinczy was appointed as a regimental commander at the beginning of 1849. He had major success in the spring expedition. In June, 1849 he was responsible for guarding three important munition producing bases, Ung, Bereg and Máramaros. By the beginning of August, he organized an entire army that he led into battle in Transylvania, where they fought till the very end. After the surrender, he was brought to Arad where they sentenced him to confiscation of property and execution by firing squad. He was shot on 25 October, 1849.

Lajos Kazinczy’s parents passed away by the time of the Hungarian Revolution and War of Independence of 1848-49, but his other family members took his death with quiet resignation. A few years later one of his older sisters tried to commemorate his brother, and make his name known in the country. A brother of his, who was very proud of Lajos’s achievements, served as military volunteer and later was appointed lieutenant. His oldest brother kept serving as palatine hussar lieutenant under the emperor, because he valued his foreign military career more than returning home and serving his own country. A few years after the suppression of the war of independence, he retired as major. He was never supportive of Lajos’ freedom fighter activities; fortunately, they never had to face each other in war.

Lajos Kazinczy’s 29 year-long life was mostly about military duties and bloody fights, and for this reason he never settled down to have a family. He died unmarried and childless. Legend has it that a Polish duchess was in love with him, praying for the young military man to return from war safe and sound. No sources were left behind to verify this statement. The young soldier was buried in an unmarked grave somewhere around the rampart of Arad Castle. Kazinczy’s remains were never found, and his final resting place is unknown to this day. In Széphalom, the village where he was born, a monument often mentioned as his grave was built to honour his memory.