In the past, beer inspired prominent cultural figures like Plato, Ernest Hemingway and Oscar Wilde who all penned down their thoughts about the brew. Many years have passed, and both the industry and pub life are thriving thanks to the evolution of beer culture. Budapest is no exception; here are some of the best beer bars!

The season of beer drinking won’t end with the arrival of autumn nights as our passion for the golden potion is a permanent state of mind. Beer is the refreshment after a hard day at work, the trigger of long conversations with your friends, the key to a memorable weekend fun. Downtown hangout Anker’t knows the drill: they serve unpasteurized Pilsner Urquell that comes from Plzeň, Czech Republic in tank. Tankovna (tank in Czech) is much more than a regular beer as it is fresher, richer and sold on tap for only 7 days after its arrival. The regulars of Anker’t are reliable beer drinkers, so arrive in time to make sure you don’t miss out this special opportunity. 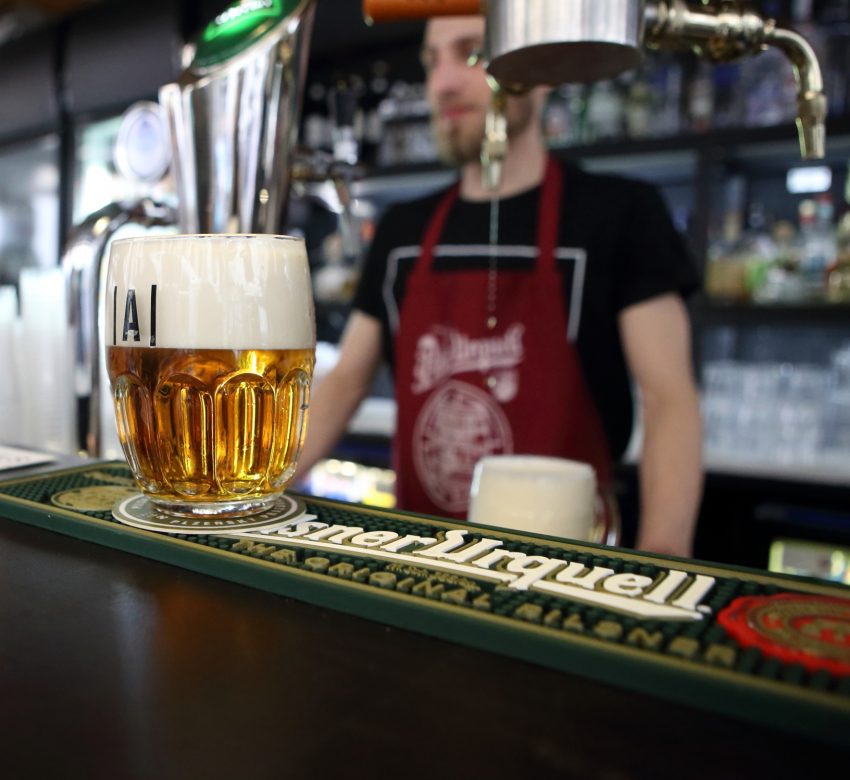 Situated just a few steps from Oktogton, Cactus Juice Gastro Pub brings a little piece of the Wild West into the heart of downtown Budapest. The American cowboy culture is evoked with an underground restaurant area decorated with wooden pieces of furniture typical of the age. The wide range of beverages, which consists of more than 30 different kinds of whisky, pálinka and craft beer, makes Cactus Juice the perfect place for office parties, bachelorette and bachelor fun, and birthday celebrations. Seasonal offers such as burgundy sour cherry soup, baked salmon with black mussels and citrus salad, and salmon tartare with dill and pickled vegetables will blow your mind for sure. 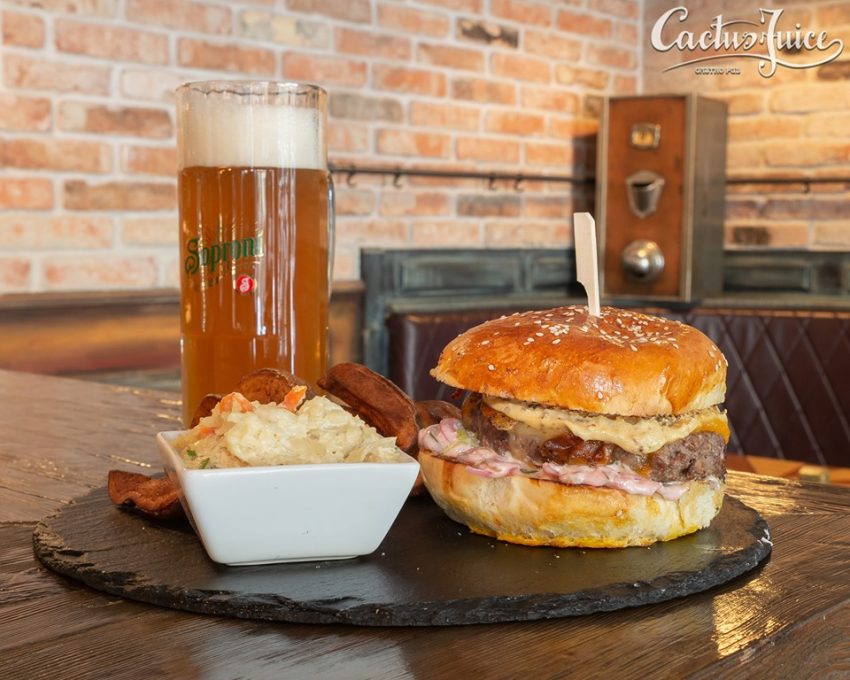 Far away from the Foggy Albion, there’s a unique burger joint in the heart of the capital city that brings a piece of England to Budapest. It offers an incomparable experience with an amazing flavour fusion. Since it’s opening, the name Black Cab became the synonym of dreamy home-made brownies, juicy salads and tasty burgers like this month’s special: Cheesy Soho Burger. We all know that burgers and beer go hand in hand, hence the drink menu is also worth checking out. One can choose from beverages including ciders, and a refreshing bottled ginger beer called Crabbie’s, but an authentic, characterful draught brew, Fuller’s London Pride is also available, if you’d want to test its burger taming bitterness. Extra point: Black Cab actively promotes recycling – both restaurants collect waste and left-overs in selective bins, making the burger joint a stand-out in the Hungarian fast food scene. 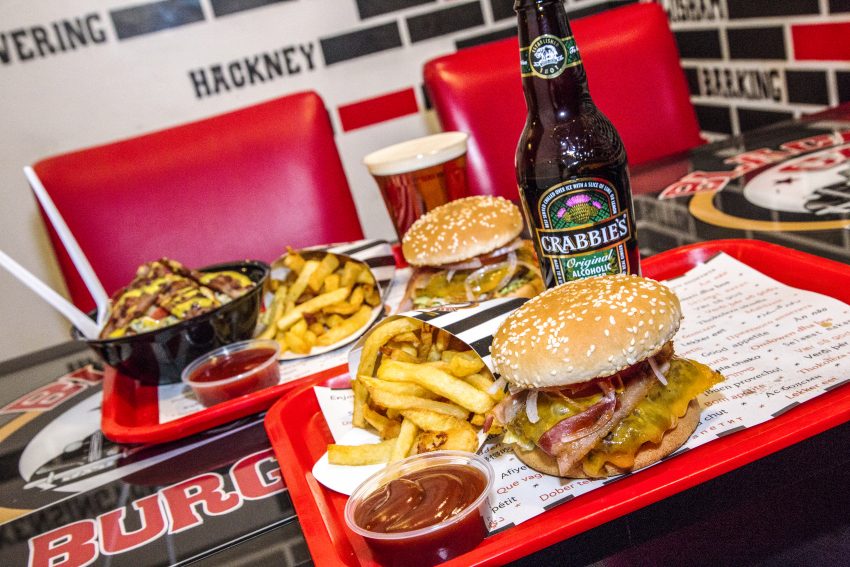 Once upon a time (5 years ago), Hops Beer Bar was opened in the heart of the infamous party district where one can make good friends and create fun memories. The atmosphere is magical, beers are bomb, and the list of draught lagers is as impressive as can be: 250 different choices guarantee that you’ll find the beer of your dreams even if you are gluten intolerant. Alcohol-free alternatives, crazy fresh cherry-cheesecake flavoured sour wheat beer – Ma Chérie essence – and amazing Imperial Stouts (15% alcohol content) are all waiting to be chosen. And the list goes on and on like a fairy tale. To ensure the “happily ever after”, Hops Beer Bar organizes weekly tap takeovers, with unique beers and live performances stealing the spotlight. It’s good to know: Hops Beer Bar is operated by Beerside.hu, meaning that prices are friendlier than in most pubs. For takeaway, visit Ráday utca’s Beer To Go!

Enthusiastic beer fanatics, curious brew adventurers, you need to get familiar with Csapház’s assortment immediately. According to its concept, Csapház serves the thirsty wanderer with local draft beers from all over Hungary, produced without preservatives, using only the best natural ingredients. Have you ever asked for takeaway draft beer? Go straight to Csapház or opt for home-delivery! Thanks to advanced technology, now it is possible to buy freshly draught quality beer, cold straight from the tap (there are 13-15 taps) so that you can enjoy the flavours only freshly draught beer has at any venue, should that be your own home, a grill party, or anywhere else. It’s a perfect gift for friends. 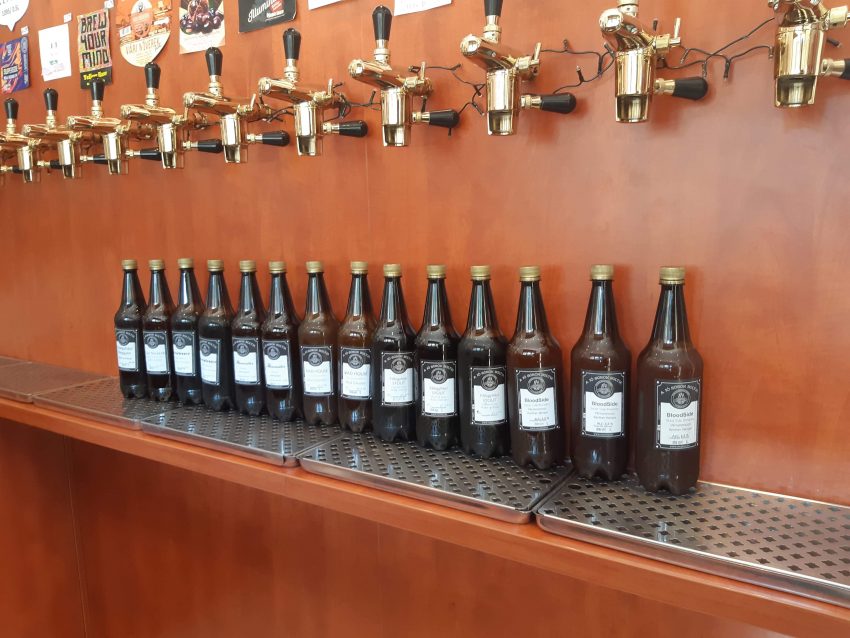 Known for its world-class jazz concerts, iF Cafe Jazz Club is located in downtown Budapest. Why are we telling this to a beer person, you might ask? Well, culinary geeks say that music has an effect on the taste of food and drinks, so give it a shot and keep your stomach happy and your throat moist while listening to enchanting tones and creative jazz melodies. The list of draught beers is as impressive as the food menu, especially if you are looking for specialties produced by small-scale Hungarian beer makers. The jazz club features craft beers on 3 taps, two of which are constantly changing to satisfy the unquenchable curiosity of beer adventurers. On the third tap, legendary German-Czech lager, Wernesgrüner entrenched itself. 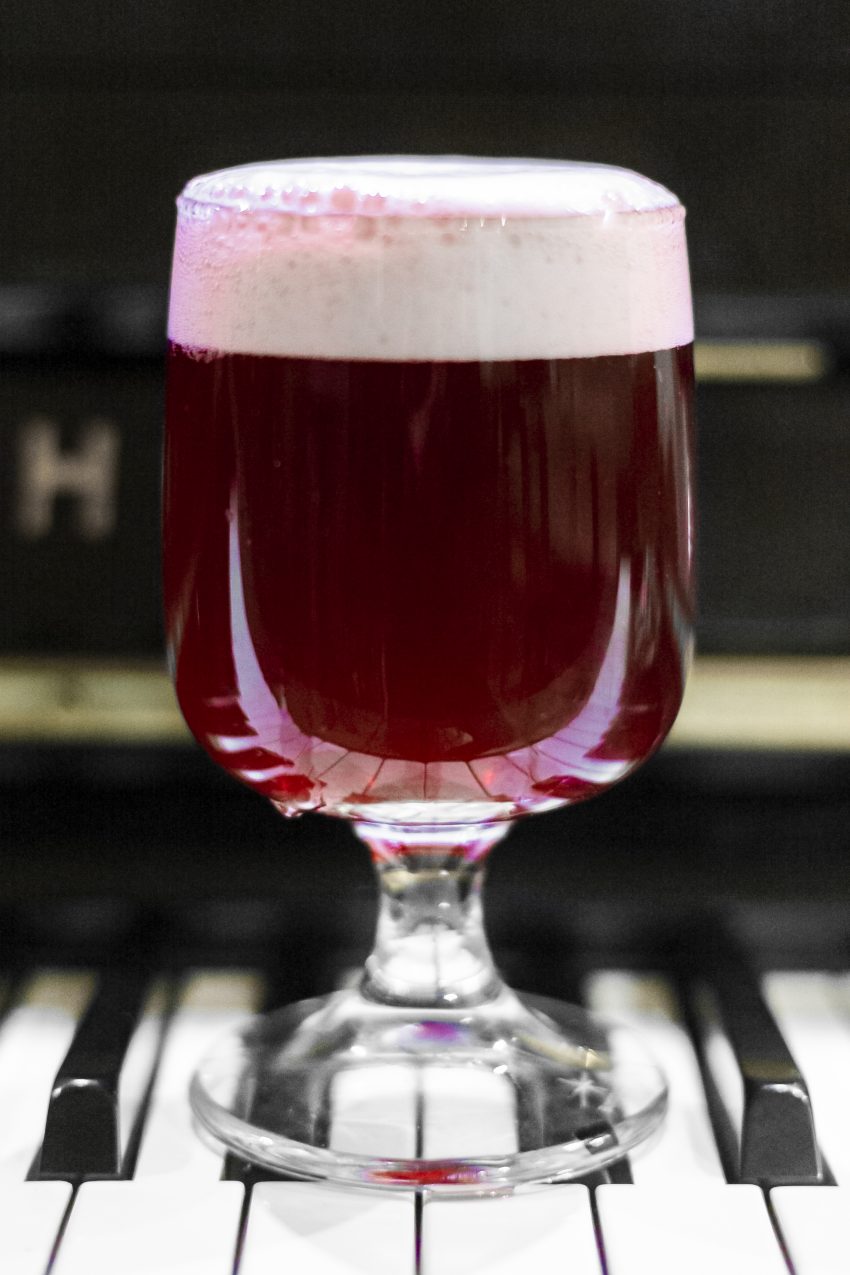 Named after Dezső the Pig from the Communist-era Hungarian movie classic The Witness, Neked Csak Dezső! started out as a tiny pub selling their own beer on Dohány utca. In 2017, however, they had moved into a slightly more spacious place, on the corner of Rákóczi út and Gyulai Pál utca. Able to house up to 170 people, Dezső features 32 local and international craft beers on tap, an open brewery with seven beer tanks, countless bottled beers, and its very own kitchen, led by Chef Tibor Tóth of Laci! Konyha! fame. Dishes available at the downtown’s biggest gastro pub include mac ‘n cheese, tom yum with carp fillet, goulash soup, Angus burger, and hummus. 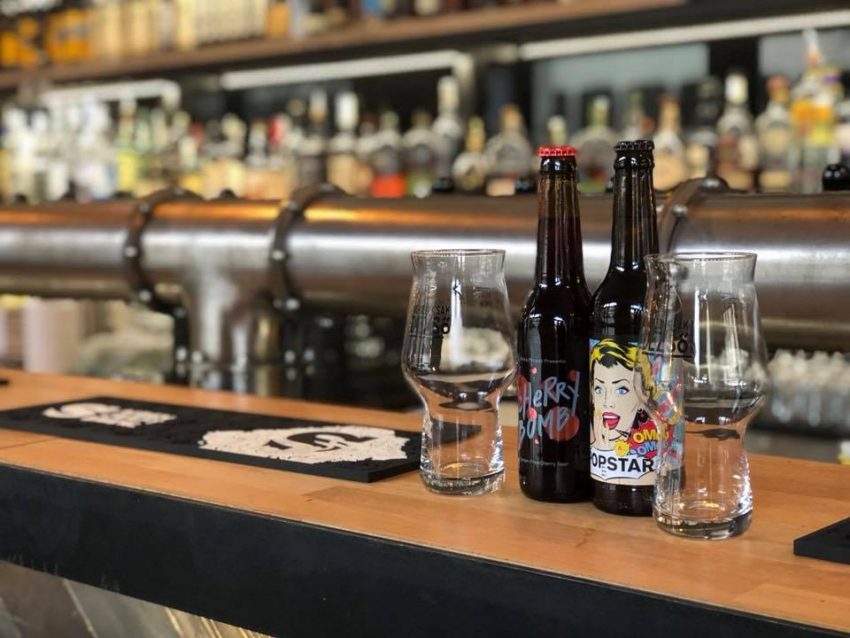 Kertész utca is one of those streets where it’s impossible to stay thirsty. A myriad of pubs battle for your attention, including Kandalló Pub, a fantastic fireplace shop-turned-beer bar, which is equally famous for its prize-winning burgers, and 16 beers on tap. Opened back in 2012, Kandalló has been around enough time in the Hungarian craft beer pub scene to know its stuff: the constantly changing beer selection ranges from refreshing, easy-to-drink items, like Wicked Water’s T-Rex Biceps and the aptly named Easy Peasy Apricot Squeezy to more heavy types, such as Balkezes brewery’s Baltic porter, the Bagoly. In addition to burgers and beers, Kandalló offers a respectable assortment of wines, cocktails, and spirits, and the faint crackle of fire. 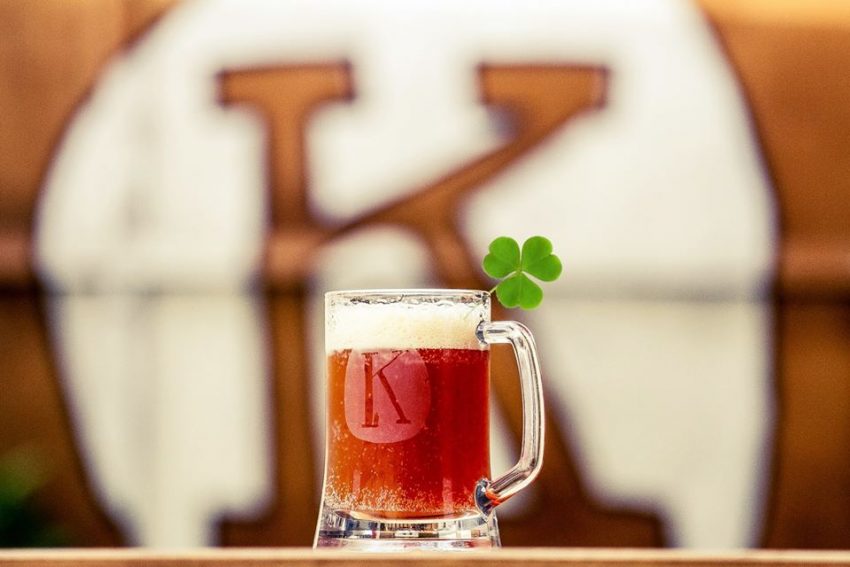 The Akácfa utca venue swears on one thing and one thing only: the supremacy of beer over anything else. Consequently, you’ll find here no fancy cocktails, high-proof shots, and award-winning wines, only delicious draft and bottled beers, and the hermelín (Czech marinated camembert) that goes along with. Hopaholic welcomes experienced beer aficionados and those who just want something more than what large-scale beer companies can offer on three floors with ten beer taps and more than 400 different kinds of bottled and canned beer specialities, showcasing some of the best brews of Hungary, Belgium, England, Spain, the Czech Republic, Germany, the USA, and more. 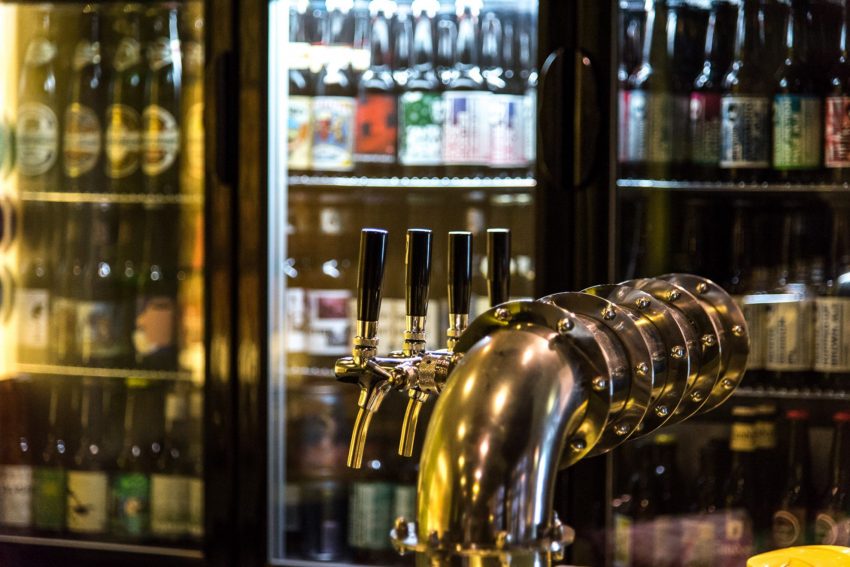 Budapest’s first steampunk pub transports you three hundred years into the future, to a post-apocalyptic world where steam power has become the main source of energy once again. Blending together the best of British gastronomy with exciting Hungarian craft beer varieties, gastro-pub Krak’n Town awaits visitors in a unique environment, evoking the atmosphere of the novels of H.G. Wells and Jules Verne. Offers include classic English breakfast, soups, sandwiches and salads, besides such rarities as Coconut black mussel soup with curry, Baby octopus with hummus, ribbed needles and cucumber beer, British Pie, and Zwack Burger, served with Unicum Plum onion jam! 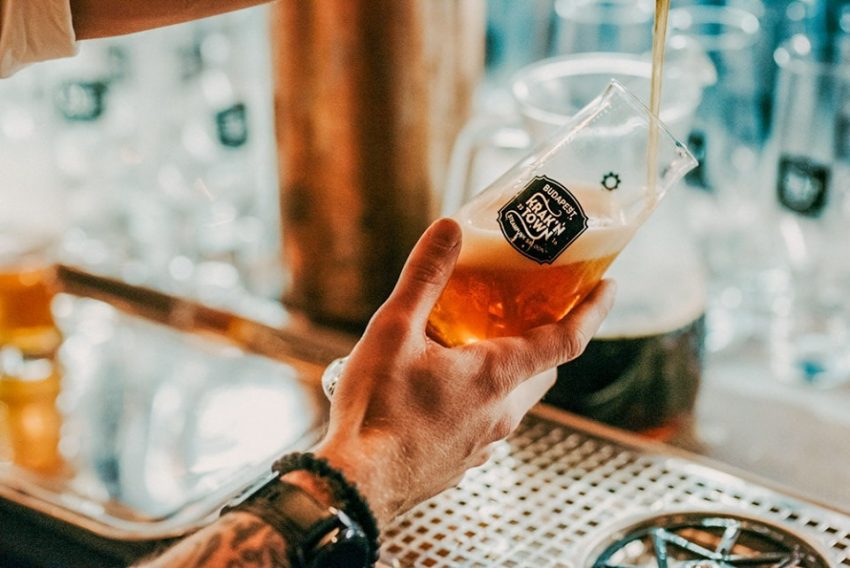