The popular event series Budapest100’s most recent edition (held on 10-11 May) revolved around Budapest’s Bauhaus heritage. The German art school, founded by Walter Gropius in 1919, made a lasting impact on the Hungarian capital’s urban fabric, spawning a multitude of private villas, apartment houses, and public buildings on both sides of the Danube. Here are a handful of Bauhaus-style examples from the best of Hungary’s interwar architecture.

Although it looks like a single construction, Dunapark House (named after the lavish café that occupies the ground floor) is actually made up of three separate buildings, each with their own entrance, mesmerizing stairways, and elevators. Designed by architects Béla Hofstätter and Ferenc Domány, the six-storey apartment complex was constructed in 1936 as part of a huge urban development project that resulted in the springing into existence of a whole new neighbourhood (Újlipótváros), built in accordance with strict and humanistic standards. Commissioned by Alföldi Sugar Factory (owned by the wealthy Hatvany-Deutsch family), the Dunapark House complex represents the peak luxury of its time: complete with (now defunct) hall speakerphones, lifts that travelled at different speeds, baby stroller garages, marble galore, a ventilation system that circulated the fresh air transported south by the Danube, a rooftop garden, and breathtaking views over Margaret Island, these buildings are still one of the most coveted apartment houses in Pest. Located under Margit körút 15-17, the Hofstätter-Domány duo’s other similar luxury apartment house, whose futuristic-looking, transparent tube elevators earned the building the name Dugattyús (Cylinder) House, also worth a mention. 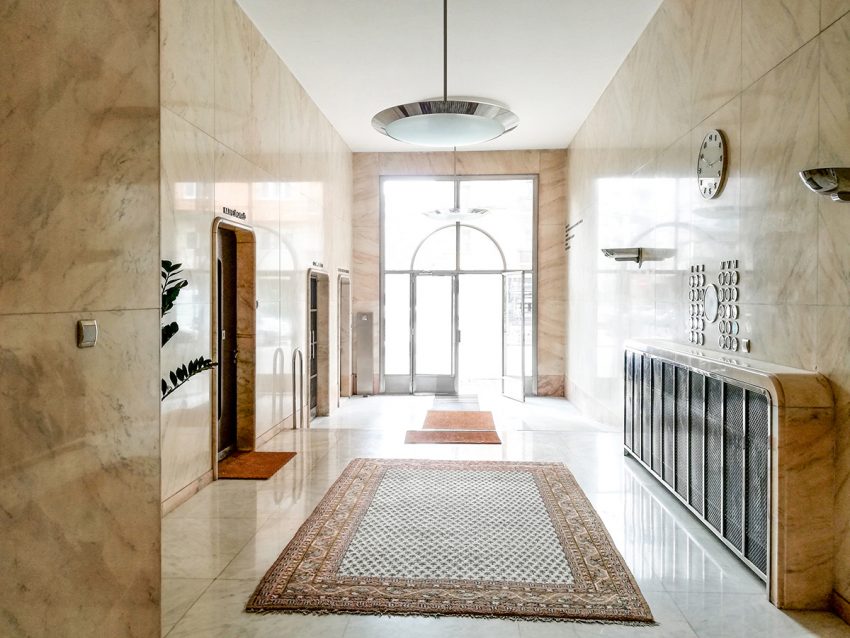 The city’s oldest open-air swimming pool complex was opened in 1919, but its main building, built from wood, soon proved to be insufficient due to Palatinus’ growing popularity. A new stone building was erected in its place during the lido’s grand-scale extension in 1937: built in the Bauhaus style following the plans of architect István Janáky Sr., the colonnaded main entrance was given a complete makeover in late 2017, recreating the building’s original clean-cut look, getting rid of all the unnecessary additions brought about by the past eight decades, and giving back the facade’s monumental and colourful fresco, painted by István Pekáry, which was destroyed during WWII. Since the end of 2017, Palatinus awaits bathers all year round, offering visitors wellness services, thermal baths, dipping pools, a number of saunas and sun terraces, besides a fancy cocktail bar, and a restaurant on the inside, and large green areas, giant water slides, and plenty of leisure and swimming pools outside. 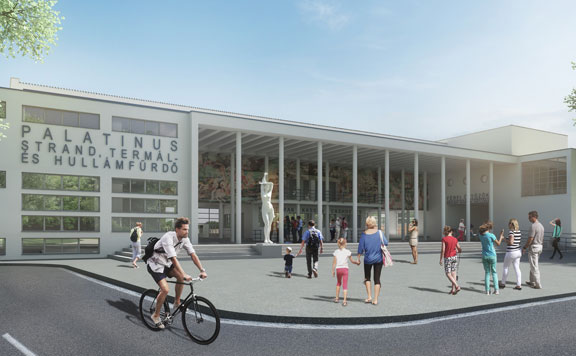 Located in the Pasarét neighbourhood of the Buda Hills, just a stone’s throw away from the Napraforgó utca housing estate, the slim bell tower of the ferroconcrete, three-naved church bears a strong resemblance to that of the Városmajor Parish Church and the Pozsonyi úti reformed church, both of which came years later. Designed by Gyula Rimanóczy Sr. (who submitted three different versions over a three-year period until his plans were finally approved), the building was consecrated in 1934, while the surrounding square – complete with a bus terminal and shops – was finished in 1937. Composed of a Franciscan friary, a belfry (containing four bells), and the church, the building complex is a notable example of Hungarian modernist architecture: influenced heavily by the Bauhaus movement, its interiors display a harmonious mixture of Art Deco and Hungarian Art Nouveau elements.

Built in 1931, this carefully hidden housing estate features 22 one-storey family houses on an area of just 1 hectare, situated in a single, 150-metres long street in the mountainous green belt of Buda. The buildings of the housing estate, commissioned by Budapest Public Works Council, were designed by some of the most progressive minds of early 20th century Hungarian architecture, including Lajos Kozma, József Fischer, Farkas Molnár, and Alfréd Hajós. Each of the estate’s houses follows the basic Bauhaus guidelines: the lack of excessive ornamentation, the abundance of linear and geometric forms, the use of quality materials, with gracefully curved corners and the playful and subtle application of colour. Check out the cute little square in the middle of the street to catch your breath and to see the full list of architects who worked on the project.