The festival season begun on the 14th April, with the American celebs and bloggers partying in Indigo, and everyone else being jealous at home. For two weekends, Instagram and Facebook was full of glamorous girls and guys posing in extravagant clothes and listening to the hottest hits live.

If you are one of those who had a massive FOMO, don’t worry, you are not alone. However, we collected a few reasons why Sziget Festival is the one worth waiting for.

If you have ever walked from the entrance of Sziget to the Colosseum without having a rest, you know what I am talking  about. I mean, it is basically like running a half marathon, while sipping beer/trying to figure out where your friends are/having a conversation, or all three at the same time. And Coachella is only worse: without a someone giving you a ride, you definitely would miss some of the concerts and hurt your legs.

The price you pay for your outfits

Let’s face it, if you don’t post the outfit you brought only for Coachella, you are not even there. Do you have any idea, how much these pieces cost? Especially considering the fact, that one might never be able to wear them (or take a picture in it, which is basically the same). This is something you shouldn’t worry about at Sziget: a really basic piece and a huge smile is enough to draw the attention to yourself.

While almost everyone visiting Coachella is from the USA, people from all over the world come to enjoy Sziget. In the last few years, more and more tourists arrive to Budapest in August to have a lot of fun. What a nice opportuntiy to get to know other cultures, or make some friends from distant counties!

Let’s dance till the morning!

While at Sziget, some are disappointed to stop partying at 5 am, when they turn down the music, Coachella shuts its lights down at midnight. And since the programs don’t start earlier the next day either, it is a waste of time! I mean, who needs sleep during a festival?

And last, but not least: the location. Coachella might be organised in the sunny California, but Sziget is in Budapest! Nothing compares to the famous baths and small cafes in Budapest, even if I can’t imagine crowds going sightseeing during the festival. 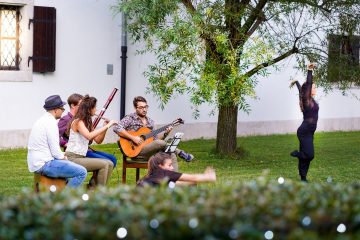