August marks the 2019 Perseid meteor shower, which means 60-70 meteors will colour the sky every hour on peak days (aka 11, 12, 13 August) in the Northern Hemisphere. We compiled a list of spots perfect for meteor-viewing in the vicinity of Budapest, but you have to do your part too: think of tens of wishes.

Why Perseid? The popular meteor shower of August was named after Perseus who, in Greek mythology, is considered the founder of Mycenae and of the Perseid dynasty. NASA expert Bill Cooke referred to the early dawn phenomenon as the most beautiful meteor shower of the year that will peak in the early hours of 13 August, but the nights before also have special moments in store for us. If you don’t want to miss the Perseids, you’ll have to leave the city centre and go to a suburban area that is not (that) affected by light pollution.

The gentle slope that runs between the northern part of Hármashatár Hill and the neighbouring Csúcs Hill is commonly known as Virágos-nyereg. The easiest way to access the open area is by car, but it is also possible to take bus number 137 from Szentlélek tér to Erdőalja út, and follow the blue marked trail for 1.5 kilometres to reach your destination. Since we’re talking about star-gazing at night, you’ll have to pre-check the schedule of bus 937 that will take you back to the city centre in the middle of the night. Once you’re there, you’ll forget about all the fuss that comes with public transportation in Budapest, as the air is fresher, the city lights are fainter, and the stars are brighter there. Since the area is free of high buildings or trees, Virágos-nyereg is a popular meeting point of experienced star-gazers too.

A popular outdoor destination among city-dwellers all year long, Normafa turns into Budapest’s number one meteor-viewing spot in the summer, filling up its peaceful slopes with a bunch of people chilling on a blanket in the evening hours. The hilltop location provides visitors with an awe-inspiring view of the surrounding area, including the Buda mountains, and the whole city of Budapest. For a perfect summer day, take the cogwheel railway from Városmajor park to Széchenyi-hegy, take a ride on the world-famous Children’s Railway, eat a strudel at the iconic food stall of Normafa, hike up to Elizabeth Lookout Tower for a wonderful panorama, and end the day with stargazing on Nagyrét.

Situated in District II, the Apáthy Rocks is easily accessible by both car and public transportation as bus 11 leaves from Batthyány tér and takes you to Nagybányai út, just six minutes walk from the hill. On the way back to the city, you’ll need to walk a bit more (about 15 minutes) to Szerb Antal utca to take bus 956 that runs only once every hour. The panorama over Budapest and the nearby Erzsébet Lookout Tower will blow your mind for sure, but don’t forget to lie down on a blanket to get immersed in the starry sky. Important to note, a torch is necessary if you pick this spot, as you’ll have to cross a narrowing trail on your way to the top. 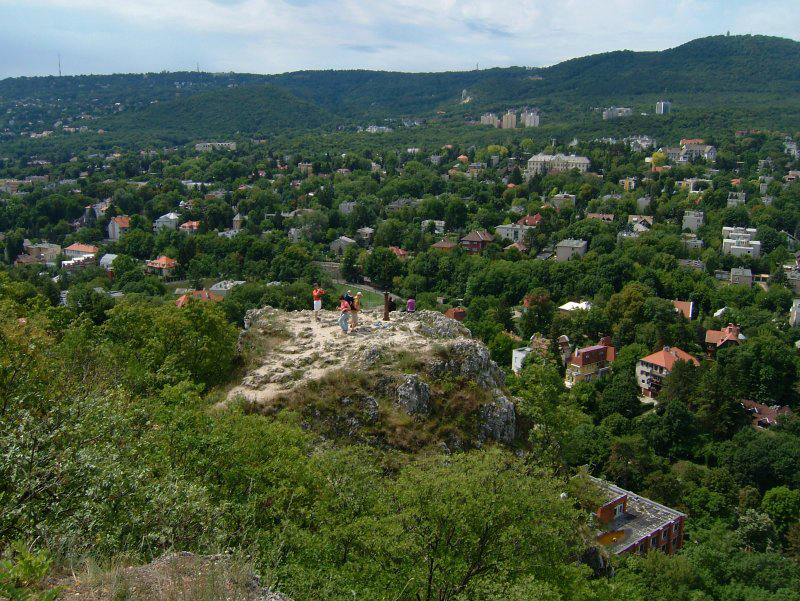 Every Tuesday, Thursday and Saturday throughout August, Hungarian Astronomical Association organizes stargazing events where visitors can observe the sky with telescopes and learn about astronomy. The sessions start at 9 PM in Óbuda Polaris Observatory.