What if you could attend a garden party without leaving the city centre? ARAZ Restaurant, situated under 42. Dohány utca in the middle of the popular District VII, arranges outdoor BBQ parties every second Friday throughout the summer, bringing the smells and flavours of the BBQ season to the heart of Budapest. Two Funzine editors went to see how it actually works.

After passing the sophisticated interior of ARAZ Restaurant dominated by shades of golden and black, we arrived to a spacious inner courtyard decorated with a black and white mural depicting the every days of the 20th century. The most eye-catching object, however, was the barbecue midst the lush greenery and warm evening lights, on which a chef was unceasingly grilling seasoned meats with a mouth-watering smell filling the air. While our nostrils were loaded with such heavenly smells, Latin tunes presented by DJ Starsky pampered our ears, perfecting the summer in the city vibes.

Starting at 7 PM, the BBQ parties in ARAZ, just like the ones you attend at your friends’ or give yourself, are self-service: there is a long line of white-clothed buffet tables crammed with all kinds of dishes inspired by the original American barbecues, in one corner of the terrace. Such garden party must-haves as corn on the cob, coleslaw, spicy chicken wings, grilled sausage, and jacket potatoes are available, but you can also make yourself a burger using fresh vegetables, homemade sauces, buns and meat patties grilled on the spot. Apart from the toothsome food offers, the fixed price also includes the well-liked drinks of the summer season: rosé wine & soda, beer on tap, Aperol Spritz, and lemonades of various flavours. Good news is there’s no limit on your food or drink consumption, so lie back and let your inner gastro hedonist emerge!

To all guests, including us, being spoilt for choice with reasonably priced, abundant and high quality meals is all a bit mind-boggling. So, before we could decide on what to eat first, we gave in to the temptation of a little fling with Aperol, the bitter orange-rhubarb drink that screams summer. To beat the heat, we opted for a bowl of cold, avocado seasoned cucumber soup as a starter. The roasted peanut garnish added a crunchy texture to it, and the flavour combination simply melted in our mouth. While walking back to the buffet heaters, we discovered the cold cuts, and couldn’t leave without a spoonful of beautifully served marinated salmon salad on our plate. Returning to the main course section, we picked cornflakes-breaded spicy chicken wings (with a great rub of BBQ sauce elevating the flavour of the meat), foil wrapped baked potatoes with spicy sour cream, a homemade beef burger freshly grilled in front of our eyes, and a surprisingly delicious, salty coriander American pancakes. It was like our senses were escorted to an American family’s grill party where we experienced a taste-bud satisfying flavour explosion.

You might think that at this point our stomach is so full we wouldn’t wish for anything else but a bed to lay down on. It’s not that you are wrong, but in reality, my companion and I are tough enough not to throw up the sponge before the finish line. We slowly shambled to the dessert section after finishing off the mains to taste ARAZ’s on-the-spot baked confectionary products (fresh American-style apple pie, cheesecake, and so on) which looked too irresistible. Believe us when we say: their creamy, light, sweet but not too sweet red velvet is to die for!

From the food to the music through the unique atmosphere and the fact that we’ve been to a BBQ party in downtown Budapest, everything was special. We had a blast, and we’d return anytime! 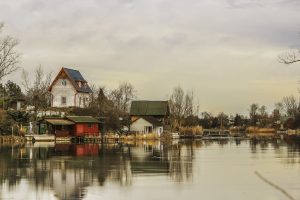